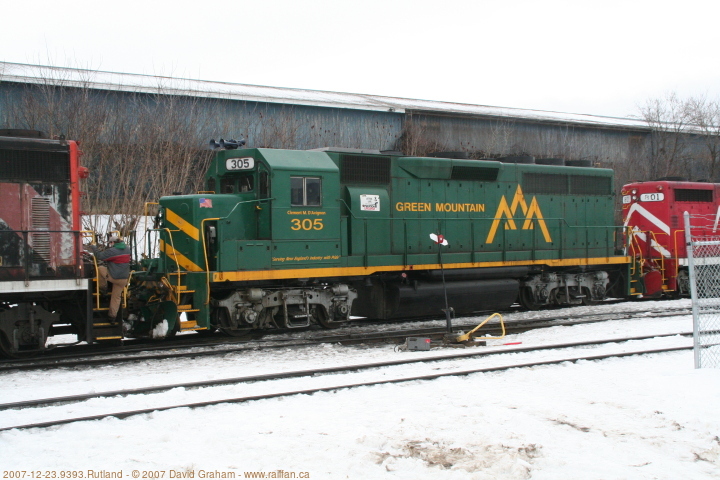 We started out in Glens Falls, New York with an eye toward getting the Batten Kill railroad in Greenwich, NY on the off-chance they'd be outside the barn. As we got ready to go we realised it was a silly idea and headed straight for Whitehall, NY. On our way we picked up an EOT and tore off to the next grade crossing where we just missed 3 NS units running southbound light power on the D&H. After a brief southward chase we realised we would not get ahead of them and returned on our original track to Whitehall. A few minutes later VRS Rutland DS indicated that the Whitehall job had already left Whitehall back for Rutland so we skipped Whitehall and went straight for Rutland, catching the Whitehall job returning to Rutland with 5 units and 42 loads. After a quick crew change and switch, they took off with 4 units and 37 loads for Bellows Falls and we returned to Whitehall to see what the D&H had to offer. Eventually the northbound Adirondack came, then 931 came -- the same one we shot over a day earlier not 100 miles away in Delanson -- followed shortly by the southbound Adirondack. We got 931 going through the station after meeting the Amtrak and then returned to Rutland taking a few hasty long exposures of AMTK 716 getting ready to head south before calling it a night at a relative's house in town.