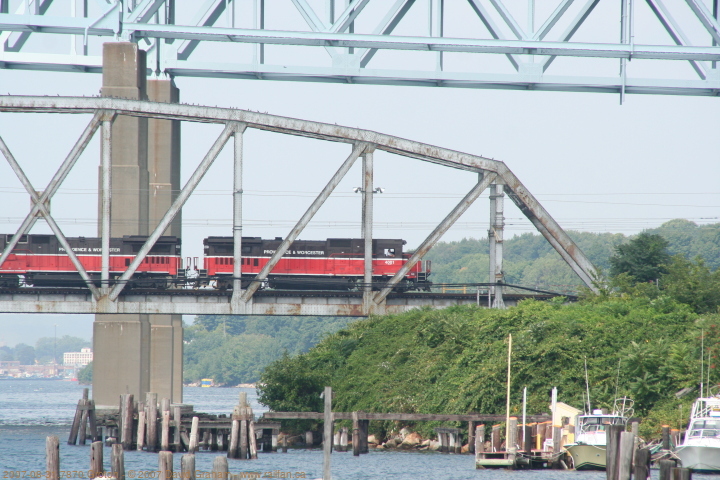 We woke up in West Haven, Connecticut and after a brief exploration of New Haven decided it was a bit too urban for our schedule or taste, so we proceeded east along the electric line out, stopping at Bradford to go into the station there. As we parked an Amtrak electric (other than Acela) passed. We waited on the platform about 15 minutes and an Acela train passed. We continued eastward toward New London where we wanted to find the NECR/PWRR interchange, but got distracted by switching sounds in Old Saybrook where we got off the I-95 and found not one but two Providence and Worcester trains switching, as well as our second Acela for the day. We checked the Amtrak schedule and found no trains coming for about 20 minutes, so we took advantage to go east to New London with a train coming to shoot there. We crossed directly into Groton on the far side of the river through town and quickly found a wide open public parking lot facing a railway drawbridge where we waited for the Amtrak train we knew we were ahead of. We heard it coming around the corner on the other side of the river and watched it stop at Union Station and then one of the PWRR trains we had seen switching Old Saybrook crossed the bridge ahead of the Amtrak. After that we were out of time and headed north to Worcester to meet a friend before continuing on to Brattleboro, Vermont.